Why Visceral “Abdominal Fat” is Bad for Your Health

A slim waist is a nearly universal benchmark of male and female physical attractiveness. There’s nothing that screams “healthy!” like a chiseled set of abs or even just a flat stomach. Health coaches, personal trainers and people on social media sites will post shirtless or bikini photos to settle any debates about whether or not they ‘walk the talk’ of the healthy lifestyle they preach. 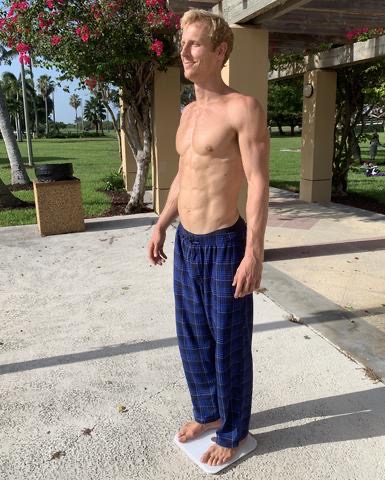 Despite the protests of the fat acceptance movement, it turns out that this obsession with a V-tapered torso in men and an hourglass shape in women isn’t just superficial vanity. The health implications of having a slender physique actually goes deep inside to our core.  There are evolutionary reasons why fat around the midsection is perceived as unattractive: it is a sign of poor health.
Subcutaneous vs. Visceral Fat
Subcutaneous fat is the stored under your skin. The excess flab around your belly button, arms or thighs that can be pinched with your fingers is all subcutaneous fat.

Subcutaneous fat is the stored under your skin. The excess flab around your belly button, arms or thighs that can be pinched with your fingers is all subcutaneous fat. 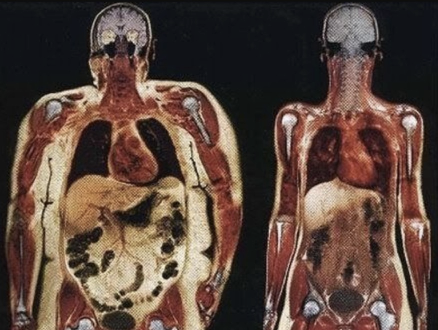 Abdominal Fat is Caused by the Modern Diet & Ultra-Processed Foods

Over the past 2,000,000 years, what humans ate was completely different from the modern diet. Pre-modern humans lived off unprocessed, whole foods that required a lot energy to hunt or cultivate. Just over 10,000 years ago, humans invented agriculture when they learned how to grow and process grains for long-term storage. Soon after they invented agriculture, they came up with the first snack food, bread. These first processed foods were remarkable because they were extremely rapidly digested and they caused insulin and blood sugar levels to raise higher than ever. They tasted great, could survive long-term storage and they were downright addictive – so cultivating and creating processed foods became a permanent part of human civilization. Unfortunately, it was not a healthy trend and it caused a major rise in our abdominal fat levels.
The earliest processed foods such as noodles and bread took some time to prepare or else they went stale, so food wasn’t always available 24 hours a day. About around 100 years ago, with the Industrial Revolution in full swing, processed foods became “instant” and packaged for long-term storage. They went from being merely processed, like rolled oats, to being “ultra-processed” like Jell-O Pudding Cups. Chemically altered vegetable oils called trans-fats emerged to help preserve packaged foods and mass-produced junk foods spung up and caught on very rapidly. Time-tested stables like olive oil, apples and chicken got put on the back burner by Crisco, Oreos and Marshmallow Fluff. By the 1930s and 40s, most Americans no longer walked to the market to buy lentils and lettuce… they drove to the supermarket in automobiles to buy Velveeta cheese, Popsicles, Wonder Bread and peanut butter cups. To a physically fit Native American warrior, these kinds of “food” would be utterly unrecognizable and looked at with suspicion. Ultra-processed foods are habit forming and eating them regularly has detrimental effects on our abdominal fat levels and vital organs like our heart and liver.

A study performed on 930 men and women concluded that having excess abdominal fat is associated with increased insulin resistance and higher risk of developing Type 2 Diabetes and cardiovascular disease.2  Other evidence links excess abdominal fat to Alzheimer’s, strokes and high cholesterol. A common health problem that is increasing in modern life is fatty liver disease – diagnosed when the liver contains more than 5% fat cells. It once mostly afflicted alcoholics and obese people, but now normal weight people are starting to develop fatty liver disease due to the availability of ultra-processed foods and lower levels of physical activity.3

If you want to fight back against the dangers of excess abdominal fat and reclaim your health, two of the fastest and most effective ways are high intensity interval training (HIIT) and intermittent fasting. HIIT is doing sets of fast, high-intensity exercises at an interval and then “resting” by doing lower intensity exercises. You could do 5 sprints of 30 seconds each, with one-minute walking intervals in between each sprint. The is evidence that HIIT exercises are a reliable way to lose body fat, including visceral fat.4
Intermittent Fasting is a popular method of constraining your eating to certain, limited times of the day or week.  This mimic a more natural, primal eating pattern that our bodies evolved for. We simply were not designed to eat 3 square meals a day, every day, plus snacks. We were designed to spend a lot of time and energy hunting low-calorie density food, not ultra-processed high calorie density “food.” A common type of intermittent fasting is called 16:8 which means you only eat for an 8 hours window of time per day (say 9 AM to 5 PM) and then you fast for the fest of the time, only drinking water. Many people report losing up to a pound a week while intermittent fasting and while keeping a reasonably healthy and natural diet. When you lose subcutaneous fat you also tend to automatically lose visceral abdominal fat,5 so get your weight down and claim your birthright of better health.